Public Art In The Daley Village

Can a Mickey Mouse stop being a Mickey Mouse and start being public art? This is the basic question that has recurred for me over the last few years of City of Chicago sponsored fiberglass public sculpture projects beginning in 1999 with ‘cows on parade’, when 322 ‘artist decorated’ life size cows were scattered throughout tourist centered areas of the city. The ‘CowParade’ brand of public art has spread to over 30 cities all over the world, spreading the gospel of ‘fun’ and ‘accessible’ public art. Pascal Knapp originally produced the blank cow template, and the Cowparade Holdings Corporation (the group who founded and manages the projects) is involved in collaborating with various local governments to solicit artists to decorate the cows. Corporations are invited to sponsor a cow, which means one of two things:
(1) The company pays for the artist to produce original decoration for the cow
(2) The company pays for the artist to decorate the cow with a design of their choosing.

This model has transformed the nature of public-private partnerships in relationship to global public art trends. Many cities feel that they need ‘cows on parade’, in a similar way that they need a building designed by Frank Gehry to compete with other global cities – allowing groups like the Cowparade Holdings Corporation to circumvent local residents desires by appealing to cities competitive and tourist-centric tendencies. The extent to which corporations can dictate the content of the project is significant of trends in public art for many years, and is a paradigmatic example of the decline of the public sphere that is experienced through intense privatization of so many areas of life.

In the summer 2001, The City of Chicago unleashed it’s second run of fiberglass outdoor sculpture under the name “Suite Home Chicago”, referencing the famous blues song “Sweet Home Chicago” and taking the form of life-size living room furniture suites (couches, reclining chair and TV sets). While inspired by ‘cows on parade’ this project was initiated separately from the efforts of Cowparade Holdings Corporation, and featured nearly 500 ‘suites’ in similar tourist-centered areas of Chicago. This time around however, there was going to be a citizen initiated public reaction. Recognizing the pitiful excuse for public art to be on par with decorating parking meters and the significant contradictions of living room suites supported with publicly funded space and resources being directed towards tourists while Chicago residents experience a massive shortage of affordable housing and public spaces to actually rest, a group of Chicago artists and activists decided to intervene.
The city of Chicago has a messy track record with housing related issues, and the artistic gesture of tourist centric living room suites was ripe for an intervention. Growing out of the April 2001 city-wide campaign to take all space in the city of Chicago for the citizens who live, work and play in it, under the name “the Department of Space and Land Reclamation”, this anonymous group of concerned citizens were deeply engaged with the politics of public space.
The public response that was generated by this group was intended to complicate the message of the Suite Home Chicago project. By covering the furniture in cardboard shacks, the homeless proof furniture would become housing (homeless ‘proofing’ public spaces has been a trend since the 1970’s book Defensible Space blew-open a string of theories and practical plans for design and architectural policing techniques in urban areas). The well-built wood frame shacks featured a welcome mat reading “Sweet Home Chicago” and the sides were covered in statistics about displacement of public housing residents in Chicago along with an oversized image of mayor Daley’s face. The project was intended to explicitly correlate the connections of the mayor to homelessness and gentrification in Chicago neighborhoods, while attacking ‘official’ public art trends and spending.

Like many fall 2001 cultural and social events throughout the world, this public intervention was sidetracked and altered by the events of September 11. For reasons of security and safety, the group was not able to perform such a direct action in downtown Chicago without fear of violent repression or arrest. The streets were covered with police and security was on high alert. Additionally, activist energies were going into quick response for racist attacks on mosques and the coming war in Afghanistan.
After regrouping in December 2001, the project needed to shift. The challenges faced included:
1>the Suite Home Chicago furniture had been taken off of the streets, and auctioned off to raise money.
2>would the already-built shacks have to be thrown out because without the furniture suites?
3> Were people ready to start talking about local issues like housing, or were they to distracted by the military action in Afghanistan?

There was much debate about the ability for the intervention to go on, many people involved with the project doubted the efficacy of putting out the shacks into a different context. Eventually it was decided that an appropriate way to get rid of the shacks that had been built, while still making a gesture in the direction that was originally intended would be to put the shacks on some publicly owned land that was being developed or sitting un-used. After some research, it was discovered the possibilities that existed in intervening in city owned land were vast, considering that there are over 60,000 vacant lots that are owned by the city.

The final decision was made to place thirty of the shacks in a city-owned empty lot in west-town, along a busy morning commuter section of Elston, just north of Chicago Avenue. The site was situated near the train tracks and was surrounded by high-end condominium development. On December 2nd, a press release was issued and 10 individuals wearing orange construction vests approached the empty lot meeting several vans loaded with the wooden and cardboard shacks. At 4am, the lookouts were hardly necessary, but gave the group peace-of-mind while going through the near 15-minute installation process.

The projects initiators knew that the potential impact and efficacy were significantly limited after the projects changed target location. The shacks slowed down traffic during the AM and PM rush hours that see Elston turn into a busy commuting street. Many people got out of their cars and took photographs and walked through the shanty town that satirically juxtaposed the facts and figures from the Chicago Coalition for the Homeless, such as “18,000 units of public housing now slated for demolition — will displace 42,000 ” with the stenciled portraits of the Mayors face over the text “ Sweet Home Chicago” and “If you lived here you’d be Homeless.” While the correlation to the fiberglass “Suite Home Chicago” living rooms was subtle and easily non-recognizable, the appropriated language of the press release and the rough aesthetic of the stenciled shanty town come together to make a small-scale yet strong gesture of attack at the troubling housing trends in Chicago and the problematic and complicit role of the Cities mayor.

While this text does not focus entirely on the phenomenon of corporate sponsored public art, or even highlight a particularly effective response to that phenomenon – it is intended to outline some of the notes and ideas surrounding the development of one particular critical public art project and it’s evolution (for an in-depth read of corporate influence and intervention in the cultural sector – see “Privatizing Culture” by Chin-Tao Wu). If the city defines public art as Mickey Mouse or cows decorated with “eli’s cheescake” paraphernalia, then the residents of the city cannot depend on them to be the only source of public art. Only through unsolicited interventions, and citizen initiated mosaics, murals, graffiti, and sculptures can we start to imagine a public sphere for art that would allow us to understand the “public” part of what public art in Chicago can be. Because there may not be such a thing as public space in Chicago, contestational public art is a must. 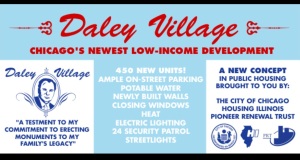 Additionally, there can be many points made in support and in criticism of the Daley regime in Chicago, but the basis of my personal critique is a simple one- this guy does not HAVE to be mayor of Chicago for the next 40 years. To quote the Chicago Social Forum organizers “ Another Chicago is Possible”, and the first major step to getting there is for a regime change in 2007.

For Immediate Release
(312) 420-7416 Groundbreaking for New Housing Initiative on Monday, December 3, 2001 DALEY VILLAGE: THE GOOD LIFE IS BACK

Just about everyone in Chicago remembers the beautiful life. Single-family residences curled up next to spacious thoroughfares, with neighbors who said “Hello”. A community of diversity, with transportation and bustling business districts nearby. Acclaimed schools and gorgeous parks…is it the Chicago of yesteryear?

Spacious single and multi-family residences with spectacular city views will offer a haven from the city chill. The homes, designed by top-notch architects famous for their attention to artistic details, all feature newly built walls and customized exterior decoration. Ample parking is also available.

WHAT: Groundbreaking ceremony for Daley Village, the newest housing initiative for low-income families

WHY: Low-income families need dramatically new and different housing opportunities. This initiative reflects the City of Chicago’s dedication to the shelter of its citizens.

WHERE: The first Daley Village test site, at 920 N. Elston Ave., two blocks north of the intersection of Elston and Milwaukee Avenues.

WHO: Daley Village is a collective effort of the City of Chicago, the Pioneer Renewal Trust development group and Housing Illinois, an organization dedicated to exploring affordable housing options for all in the Land of Lincoln.

Daley Village Notes
Power Brokers:
-Richard J. Daley, Mayor 1955-1976
-Richard M. Daley, Mayor 1989-present
[Economy:]
-Illinois department of employment security (IDES) estimates that between 1976 and 1990, Chicago lost more than 150,000 manufacturing jobs, leaving a lot of trained laborers unsuited for life in the new economy and in need of completely new training
-In 1990 manufacturing only accounted for 20% of the work force and has been in steady decline over the past 15 years. Coinciding with this shift was the gaining of 178,816 service jobs between 1970-1984. (Betancur, J.)
-T.I.F. Tax Increment Financing was brought about in 1977 through the Illinois General Assembly
In 1999 17 of 20 of the City’s most financed TIF Districts were in the Loop
[Land:]
Chicago Loop: 7×7 Square blocks in the eastern party of the city.

One thought on “Public Art In The Daley Village”