All images courtesy the artist and Rhona Hoffman Gallery.

What do pop music fans and social justice activists have in common? Besides the humorous stereotypes of sweaty crowds and funny outfits, the connection that strikes me is that they spend all day on the internet and then every once in a while get a payoff from a big event. There is an approach to living that centers around fantastic and implausible convergences that overwhelm the body, temporarily transform social relations and compensate for the sensory deprivation of monotonous daily life. The planning and plotting that build towards the event climax, and can never be recovered – forcing the individual to obsessively recount the event through artifacts and documentation while plotting for the next big moment. But what happens when the big event doesn’t readily reveal itself in the form of a spectacular concert, action or transformation? What would it take for the fan-activist to identify with something more diffuse?

Michael Rakowitz writes, “Once I completed my collection of all The Beatles albums I started buying outtakes, alternative mixes and concert recordings. These were only available as bootleg records and I poured over them, listening to the extra verse here, the slightly different guitar solo there. Eventually, I became obsessed with trying to locate the moment when it all went away, when the band broke up.”

‘The Break Up’ is Rakowitz’s first solo exhibition in his adopted home of Chicago following 15 years of international projects. Many of his ambitious works have been presented and championed by curator Carolyn Christov-Bakargiev who commissioned his first institutional project during her tenure at P.S.1 in New York City (2000) and included him in the recent Documenta 13 (2012). The artist has developed a reputation for site specific works, yet has also succeeded in translating his research-intensive practice into material for pleasingly elegant exhibitions in a manner rarely achieved by artists with participatory and public practices. Narrative plays a prominent role in his practice, often weaving together social history and geo-politics with family history focusing on the culture of his mother’s Iraqi Jewish family who were exiled to the United States in 1946.

Many years in the making, the current exhibition is a combination of artifacts and art objects from the research for his ten-part radio series originally broadcast on Amwaj Radio in Ramallah in 2010, including a video and audio installation that present material from the radio broadcasts and a live concert by musicians associated with the well known music educators and band Sabreen (aka the Sabreen Organisation) staged on a rooftop near Jaffa Gate in Jerusalem. In addition to the gallery show, the video and audio documentaries originally commissioned by the Al Ma’mal Foundation for Contemporary Art are available at the-breakup.net and the concert SABREEN- Live in Jerusalem is available through a limited edition catalog and record pressed by the gallery in Chicago in collaboration with Lombard-Freid, Rakowitz’s gallery in New York.

Thematically, the whole project mashes up the story of the disintegration of The Beatles with an abbreviated history of Middle Eastern revolution, unity and disunity that largely centers around the Six Day War fought between Egypt, Syria, Jordan and Israel in 1967. Formally, it is eclectic with maps, records, magazine covers and other forms of ephemera – cast in the shadows of the artist’s iconic hand written notes and sketches on the framed wall piece and vitrine glass that coheres the presentation. Some areas are more sparse and provide space to let the explosive soundtrack of Rakowitz’s audio project fill the space.

In looking for the precise moment of The Beatles ending, a slew of obscure records fill the vitrine with points in the vinyl grooves marked by pins corresponding to notations on the glass above, reading the likes of: “Right here the group points to the death of their manager, Brian Epstein as the moment it all went bad.” With the passionate rigor of a fan, Rakowitz dissects the fizzle between the bandmates while posing almost absurd geo-political analogies with the dissolution of political unity in the Middle East, casting John as Egypt, Paul as Israel, George as Iraq, and Ringo as Jordan (after all, he was the king of diplomacy). The exhibit ephemera, mostly culled from Rakowitz’s personal collection and tracked down on ebay, locates the audience in the past – but it is not without relevance to expressions of unity and disunity in the region today.

Born in New York in 1973, “I grew up without The Beatles” says the artist in a conversational tone on the narration to his radio series. “I grew up in their post-period…post mortem. Yet I still feel like I belong to that past. Now I can’t go back, no one can go back. Does this make sense dear listener?…it should not be a dream to return, it should be a right, damnit.” Like an emotionally vulnerable radio host, Rakowitz reveals his position and disrupts the host persona. This is his Palestine project. A blue neon light in the window, visible from the street all day, reads “Live In Jerusalem” in that famous “drop-T” font used in The Beatles logo. Below it, blinking in red, “Out Now!”

Bringing together the sometimes parallel and other times completely unrelated history of a band and a political territory requires a knack for finding connections that could only be achieved with a combined conspiratorial and spiritual investment in the material. Just as Rakowitz has to believe in the connection between John Lennon’s December 8, 1980 assassination and the beginning of the first Palestinian Intifada seven years later to the day, the activists who fight every day for the “right to return” must infuse what might seem like small victories with deep meaning. Politics from the position of the dispossessed requires investing significance in every event, while retaining a long view.

It might seem preposterous to someone who does not expend their life force working for a free Palestine to look into Rakowitz’s vitrine and see any connection between the stone from the Western Wall in Jerusalem and a piece of brick from the Cavern Club in Liverpool where the Beatles played hundreds of concerts. But fans see connections and meaning that others cannot see. Activists see connections that others cannot see. What else do pop music fans and social justice activists have in common? The appreciation for the complex and cumulative story, not unlike the rich and fragmented narrative presented in The Breakup. 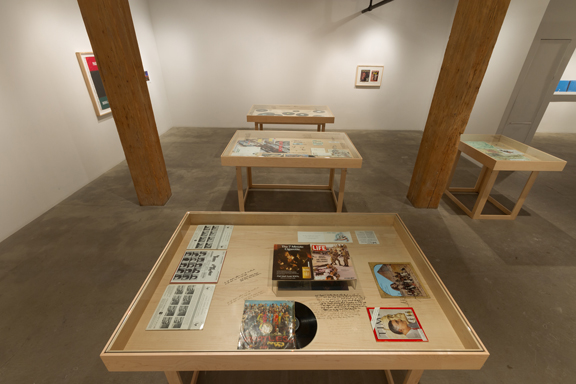 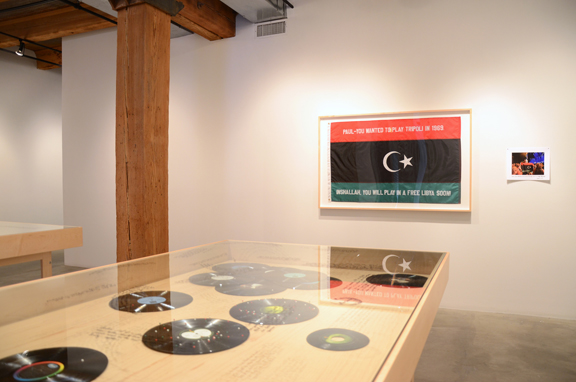